The boys and I went to a ceramics make & take Friday night with their cousins. Lots of fun and the woman who owns the business seems very nice. But I don't think she understands kids very well, even though she works with them a lot. She took one look at P. and announced that he could paint the cat because it was all one color and didn't have small details since he would not be able to handle them. I told her nicely that he was capable of picking the piece he wanted to paint and I was cool with imperfection. He picked a lizard. She insisted on giving him the green paint because lizards are green. He didn't want green, he asked for orange and red. I got him orange and red and she seemed surprised. M. also picked the same lizard but he wanted his to be red, black and yellow stripes with a turquoise underside. "No, " she said again, "lizards are green." I said he can do it however he likes, it's his lizard. After a few more similar exchanges, she gave up on us and started insisting that cousin's reindeer must be brown all over. Now really, what kid is going to want to paint with only brown?

Today we took the boys to a free movie at the big theatre/playhouse downtown. It was Wizard of Oz so I knew P. would sit still for it, that's his favorite movie. Come to think of it, it's one of my favorite movies. As we waited for the show to start, the man in front of us was annoyed because M. kept kicking his chair. M. insisted he wasn't, he was just swinging his legs. No matter, I said, sit cross-legged and try really hard not to swing. Throughout the movie the man kept turning around to check that M.'s feet were not near his seat. They weren't, because by this time he'd made me paranoid about it. But really. It's a free movie for kids. There are, like, 10,000 kids here. The man had 2 kids of his own, who were no doubt kicking the seats of the people in front of them. It's a free movie for kids. It's not a $200 ticket to the opera. There are kids involved. You gotta expect a little excitement, noise and dancing & singing. And yes, maybe even some leg swinging.
Posted by BethBG at 10:25 PM 1 comment:

Last night after the boys got out of the bath I went to get their pajamas. When I got back, there they were: stark naked, movin' and groovin' to the music from their Tooth Tunes toothbrushes (the themes from Transformers & Star Wars). D. and I were practically in tears we were laughing so hard.

Before you have kids you picture all the big stuff, like learning to walk, birthday parties and going off to college. You could never imagine the little everyday moments like these, which makes them even more precious. Right now I can't think of any greater blessing than being a parent.
Posted by BethBG at 7:41 PM 1 comment:

Labels: Cute things they do, parenthood

I just joined a scrap challenge entitled "Twelve of Twelve" started by Susan. I found out about it from reading Cathy's blog. The premise is simple. On the 12th of each month, take 12 pictures of your everyday life and scrap them. Sounds fun, yes?

This is the first one I've done and I'll admit I didn't remember to take any photos until around 1:00. We're pretty laid back here on Saturdays and I've been wanting to do a layout about that for awhile, so it all worked out. Here's the layout: 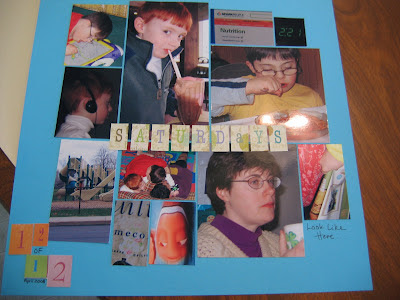 And the explanation: Saturdays are all about relaxing in our house. The boys are worn out from school and I'm just plain worn out. So we spend the day (from left top to right bottom) making art, playing on the computer, going to playgrounds, having ice cream treats at our favorite local place, dog piling with Dad, reading (Quilter's Homecoming by J. Chiaverini), watching tv (Finding Nemo), logging into SparkPeople (yikes, I've used more than half my daily calories before lunch!), getting dressed at 2:21 (usually when D. gets home from work and says "you're STILL in your pajamas?!") going to dinner for spaghetti at another favorite local place, drinking a lot of tea, and reading Simple Scrapbooks before bed.

This past weekend we participated in Earth Hour and turned off our lights from 8 to 9 pm. When I told the kids about it M. was all for it. "We have to stop Global Warming, Mom! Where is he? Why don't they just put him in jail?" It's funny how kids interpret things sometimes, isn't it? But now I can't get these two guys out of my head. Picturing them helps me turn off the lights and keep recycling! 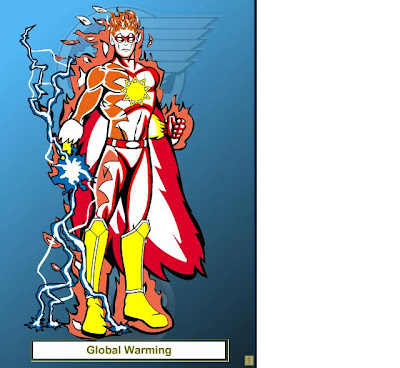 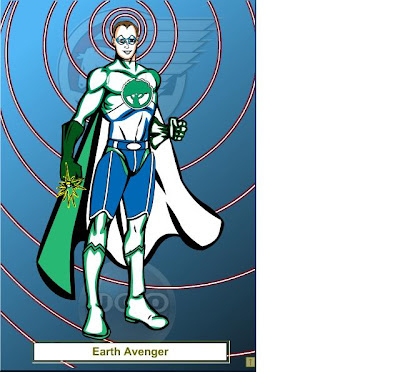 (If you want to create your own superhero, go here)
Posted by BethBG at 8:40 PM 25 comments: