Last night we were at a Halloween party. Another of the guests was a 7-year-old boy with Down syndrome. P. ran by him, stopped, and came back. He looked up into the boy's eyes, smiled and patted him on the chest. The other little boy smiled back. Then they ran off in separate directions. Once, walking through a mall at Christmas time when the boys were toddlers, an adult man with Down syndrome gave P. that same kind of smile.

Witnessing exchanges like this remind me that some cultures believe that people with Down syndrome are the closest beings to angels here on earth. They recognize that in each other. I wish we all could.
Posted by BethBG at 2:40 PM 2 comments:

M. stayed home from school today with a fever, so my plans of stripping wallpaper were pretty much shot (I was really heartbroken). As anyone with a sick child knows, they don't want you too far out of range. So we snuggled on the couch and watched a movie (Dreamer - really good!) and later we did some art projects.

I found this quiz the other day on one of my favorite organizing websites. Fun, but a bit disconcerting when I realized that I am essentially all of these except The Rebel. Hoarder - yup, that's my craft area(s)! Deferrer - yup, I can procrastinate with the best of 'em. Perfectionist - well, I am a Virgo. And the blog title says it all. Sentimentalist - uh huh!
So with that in mind, and since I wasn't going to ge 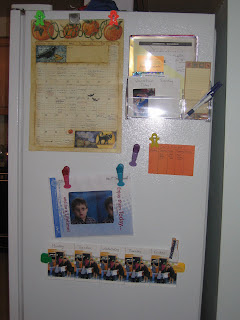 t much done today otherwise, I decided to tidy up and reorganize the "command central" area of the kitchen. There was so much stuff stuck to the refrigerator I had no idea what any of it was anymore and every time you walked by something would fall off it. I took everything off and organized the papers into folders: M's school handbook and papers, P's school handbook and papers (they go to different schools in different districts), separate homework folders for both boys, appoin 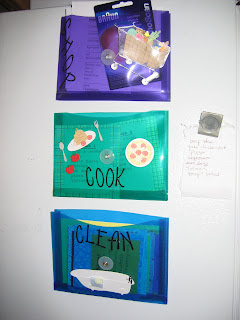 tments and events (that little pocket on the calendar wasn't big enough), & all the papers I need for Room Mom duties. That all got organized in a nifty super-strong magnetic holder next to the calendar. Then I redid two little photo calendars: one for P. so he knows whether today is a school day or a pajama-weekend day and one so we can remember what to bring to school on what day (library book, show & tell, etc).

I had revamped my Tea Towel Cleaning Schedul 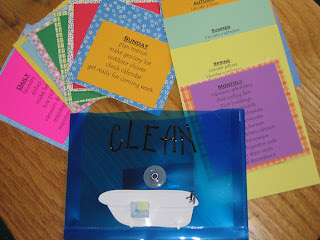 e a bit and printed it onto cardstock last week, so I made that into little cards for each day, as well as lists of monthly and seasonal cleaning chores (with input from the same organizing site and this one. I lost my shopping lists when the old hard drive croaked so I redid 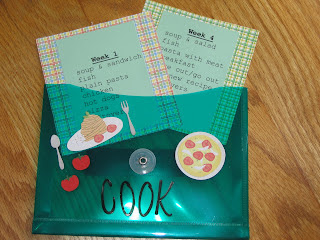 those too. And my menu lists. I put all of it in plastic envelopes that I put sticky magnets on and dressed up with some stickers from my scrapbooking stash. We Only Get One Planet

Today is Blog Action Day. What are you doing lately to protect and preserve the environment? You don't have to make big sacrifices to help the environment (though those are good!). Even little things will help.

Around here we clean with a lot of natural stuff, like vinegar & baking soda. There are a lot of books available with "recipes" so you can do the same thing. Vinegar kill 99% of household germs, so I wash the floors and other surfaces with it. It smells nicer than some of the chemical products and I always want to eat a salad afterward, which since we buy organic produce, also helps sustain the earth. Two for one!

If we ever have serious money for a new car or the government gets their energy act together, I totally want to buy a hybrid vehicle. I can't ride a bike to work like my niece H. does (Hi H!) because here in Western New York there is snow. And I'm not working outside the home at the moment. But today I did park my car at one end of the strip mall parking lot and walk all the way to the other end and back (with packages!) instead of driving from store to store. So I cut down on emissions and got my exercise too. Another two for one!

In the spring we are going to start a garden in the space where the broken down shed used to be and attempt to grow veggies and maybe some berries. As I said above, we buy organic as much as possible, both for our health and the health of the earth.

Reduce, Reuse, Recycle. We've all heard it, but we need to do it. We recycle a lot around here, even the boys know not to throw out a piece of paper or cardboard in the regular trash. And M. is always going through the recycling bin looking for stuff to make art projects with. We send outgrown clothes to friends with younger kids or take them to Goodwill. I'm still working on the Reduce part, in many ways.

We only get one planet. Don't leave your kids a sick one.
Posted by BethBG at 7:32 PM No comments:

The Little Things Are the Big Things

We realized the other day that life around here seems a lot easier and calmer. A lot of that is due to the fact that P. has shown a lot of progress since school started.

He is starting to tell us when he has to use the potty, often getting out of the bath or bed to go again before he goes to sleep. This week he kept his pants dry for a 40 hour stretch! And I don't really want to count the accident, since he was sitting on the potty at the time, he just forgot to take his pants off first.

If he needs medicine, he drinks it right out of the little cup, no more holding him and forcing it down with the little dropper.

This morning he insisted on eating his yogurt all by himself. This doesn't sound like a big deal unless you know that all his vitamins, ginko, fish oil, iodine and flaxseed are mixed in there. (Would you eat it on your own?) He can help himself to a snack or drink if he wants one, though I have to check to make sure the refrigerator door gets closed. He's trying new foods voluntarily. All the fruit in the drawer has little bite marks. More food is going in his mouth than on his shirt, lap, or the floor. Last week he got the step stool out of the bathroom to get the cup he wanted from the back of the counter. Then he got a drink of water from the refrigerator door dispenser and put the cup in the sink when he was done.

He puts his dirty clothes in the hamper or down the laundry chute. He tries really hard to get dressed and brush his teeth by himself.

He knows how to use the remote to turn on the tv and the DVD/VCR and get the movie he wants to watch in the right slot.

He gave M. a hug and kiss this morning when M. was upset over a bad dream. He says thank you to the bus driver when she brings him home and yesterday he attempted to say "good weekend."

The past few weeks he's been spontaneously running around the house pointing at things and naming them. He's much more willing to attempt new words. He's not snorting all that much at school. He knows about 20 sight words.

He's making good progress at coloring in one area rather than all over the page and he can say all the colors (orange is his favorite).

In swimming class he is moving to the belt with only 1 floaty and the instructor says he doesn't even really need that but they have to follow all the levels.

Yup. Things are going good here.
Posted by BethBG at 9:35 AM 2 comments:

Things Best Filed Under "You're Better Off Not Knowing"

The Real Reason We Trick or Treat at Night

It's traditional to trick or treat after dark. If you took a man-on-the-street poll you'd hear a variety of reasons for this: it's spookier that way, people are home from work to give out treats, it gets darker earlier at that time of year. But if you take a mom-on-the-street poll you'll hear the real reason. Trick or treating in darkness does not show the wear and tear on the costume. Every mom who has been costume shopping already is experiencing the same thing: kids who refuse to take off the new costume. M & P have had their costumes about 30 hours and so far apple juice has been spilled, ice pops dripped, cheeseburgers sat on (don't ask), and ripped hems narrowly avoided. By the time Halloween comes around I can only hope that these beauties don't look as wrecked as the rest of the stuff in the dressup box. But even if they do, it will be dark, no one will notice. Except another mom maybe...
Posted by BethBG at 10:30 AM 1 comment: 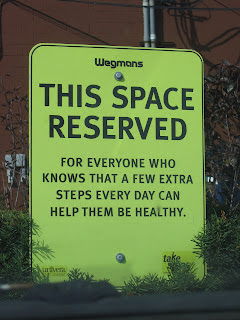 As I was driving through the parking lot last week thinking "what are they giving away?" I saw this sign at the very end of the parking lot. At first I thought it was for employee of the month or something. Then I got close enough to read it and laughed. Ever since then, I have this insane compulsion to park there! If somebody else has beaten me to it I smile and say "good for you!"
Posted by BethBG at 10:49 PM 1 comment: