We had a family dinner last weekend. The kids were all playing so nicely. And so quietly. Yeah, you're right, that should have been my first clue.

They had asked if they could do art projects in the family room, which was fine with me so long as it didn't involve paint or playdoh and they cleaned up the mess afterward. They asked if they could make a "cave" which was also fine. I assumed they were doing something with the couch cushions since those items almost never actually reside on the couch. It turns out that they were taping the art work to the walls to make the room look creepy and cave-like. Also ok as I have been known to tape artwork to the walls myself, particularly in the kitchen to hide all the holes and the stripes of potential paint colors.

But I have to draw the line on using a glue stick to put stuff on the wall. How the heck am I going to get that and its bonded orange construction paper off my pale blue wall? Honestly, if they had done it in the kitchen or the playroom (aka what most people use as a living/dining room) or the hallway I would have laughed and moved on. But they picked the family room. The room that we redid last year after removing the ugly 1960's paneling. The room that looks better than the whole rest of the house put together. The room that looks like grownups live here.

Then there are the houses that have me totally stumped. I know kids live there because I've met them, spoken to them, maybe even followed them inside. But there is absolutely no evidence of them anywhere. It's like entering an alternate house universe. A house black hole. And the whole time I'm there I'm discreetly searching for the evidence. I'm looking for a fingerprint on the light switch. A cheerio under the couch cushion. A stray sock peeking out from somewher 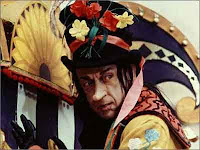 e. Something! Anything! I become this guy. ---> We've got ice creams and lollipops and candies, allllll free today! Where do they keep the kids and all their associated flotsam in these houses? I imagine a set of graduated nesting boxes marked "baby" "toddler" "little boy/girl" "bigger boy/girl" and "teenager". Are the kids just more well behaved and trained in these houses? Are they all neat freaks with touches of OCD? Maybe they have a full-time nanny and a separate wing for her and everyone under 18. And a housekeeper. What? Where? How?

And then I started thinking what if there were a house rating system? How would kids rate houses?

** kids might have lived here once a long time ago. Lots of rules, very few messes allowed, snacks are of the disgustingly healthy variety

I think our house would rate 4 stars. Possibly 5 stars on some occasions. For the most part I don't mind being the kid friendly house in the family and possibly the neighborhood later on. You've got to be a grownup for an awfully long time so why not let the kids enjoy being kids for as long as possible? This is not to say that I'm going to abandon attempts to make my boys eat veggies, make sure they say please and thank you (even to the brother who's sitting on their head), tidy up and all that other good stuff. But I'm not going to let a spill or some paper scraps on the floor ruin our day. I'll figure out a way to get glue stick off the grownup wall. Because when all is said and done, I'd rather have a 4 star house than a 1 star house.

I'll just have to wait to have totally grownup house until the boys leave home. I'll be around 65 by then. I can live with that. I can enjoy it until whenever grandkids hopefully arrive and then I'm sure we'll be back to paper scraps and spills.

But I'm definitely going to hide all the glue sticks.
Posted by BethBG at 12:34 PM

Hey, I need people that BELIEVE that elephants are purple and that the sky is green. If that means I have to sweep up a little more or put up with messes till I sweep up when I feel like it I say fine.
PS nobody ever said in in a TV interview that "My regimented responsibility driven childhood is the reason for may success"
Except Mason Dahmer and Bundy
Let the kids play will paint the place when they are in college

Beth dear, This is the first time I've gone to your blog and read stuff! You write like I do. About where we are. So far as the house goes? Ya know, I'm with you. I would love to think I can have both a kid friendly and adult friendly house... but for now, the kids are 6! they're KIDS! Let them be creative; find construction paper and imagination ... I'm all for that. Every now and then though I wish I had a maid! But I'd much rather have happy kids... there has to be a happy medium, if you find it let me know!
Hugs, Teresa

Beth dear, This is the first time I've gone to your blog and read stuff! You write like I do. About where we are. So far as the house goes? Ya know, I'm with you. I would love to think I can have both a kid friendly and adult friendly house... but for now, the kids are 6! they're KIDS! Let them be creative; find construction paper and imagination ... I'm all for that. Every now and then though I wish I had a maid! But I'd much rather have happy kids... there has to be a happy medium, if you find it let me know!
Hugs, Teresa