As Much As I Hate To Admit It, Leonard Cohen, You Are the Man

My husband is a serious Leonard Cohen fan. He was always trying to get me to listen to some song or other. And I would run screaming from the room. Literally. While I can read his poetry or the song lyrics and agree that this is seriously good stuff, when he sings I find his voice is really 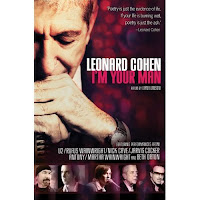 irritating. Ok. It made me want to stick my head in the oven. It even became a joke over the years. "I'd rather listen to a Leonard Cohen song, than do X." "If you don't behave I'll make you listen to a Leonard Cohen song." Still when this movie came to our local theatre I was willing to book a babysitter and go. Sometimes getting out is more important than the what or where, you know? But the critics panned it and D. decided he didn't want to spend the $ to see it on the big screen. So I put it on my Netflix 'save' list for when the DVD came out and promptly forgot all about it. A year and some later, it makes its way up my queue and appears in the mailbox. So being a good wife, I get the kids to bed and go downstairs gritting my teeth in the name of marital harmony.

D. loved it (no surprise). I loved it (surprise of epic proportions). We watched it all the way through and then rewatched our favorite parts. Over the next few days we slipped it in around Monsters Inc and Bear in the Big Blue House and enjoyed a song or two. I ordered the soundtrack CD and that's been playing away upstairs in the office. We found some new artists we liked enough to buy a few more CDs (U2 and the man were the only folks in the movie we'd ever heard before). And when Leonard himself sings now, I (gulp) like it. I'm a Leonard Cohen fan. There, I said it.

Is this one of those "the longer the couple is together, the more alike they get" things? Because if I suddenly tell you that I'm going to ride 100 miles on a bike, you have to agree to slap me repeatedly until I come to my senses. Ok?
Posted by BethBG at 10:20 AM

That's fantastic that you did that for your husband!